“We are excited to complete the transformative acquisition of Larry H. Miller Dealerships. With its strong culture and stewardship mentality, coupled with the ability to rapidly expand Asbury’s presence into these desirable, high-growth Western markets, it is a rare opportunity,” said David Hult, Asbury’s President and Chief Executive Officer. “Larry H. Miller Dealerships is a well-run operation with a rich history, and we are honored to be the stewards of Larry and Gail’s vision. We have enjoyed getting to know the Larry H. Miller team members during this acquisition process and look forward to working together to continue the journey.”

“Our family expresses deep gratitude to the employees of Larry H. Miller Dealerships for their ongoing commitment to our organization over the past 42 years,” said Gail Miller, Owner, LHM Group. “Our employees have continually exemplified our values of hard work, stewardship, integrity and service. Their dedication to our customers and our communities has allowed us to become the second largest privately held automotive group in the nation. We treasure them, our loyal customers, many partners and deep friendships built during four decades in the automobile business. David Hult and his team have been exceptional to work with and we appreciate their approach and care during this transaction. Our family looks forward to continuing our mission of enriching lives through reinvestments in new business opportunities and continued philanthropy.”

“We couldn’t be more pleased with the approach and stewardship Asbury Automotive Group has taken during this process,” said Steve Starks, Chief Executive Officer, LHM Group. “We know they are people-focused, which includes their associates and customers. Our employees now have an opportunity to continue building an exciting future with a leading automotive group that will have coast-to-coast operations. We want to thank Dean Fitzpatrick and the LHM Dealerships leadership team for their incredible work and tenacity throughout this transaction, as well as their constant efforts over the decades to grow the automotive business. Moving forward, the LHM Group expects to further diversify and grow our portfolio of operating businesses and investments.”

In addition to the dealerships, Asbury acquired TCA, 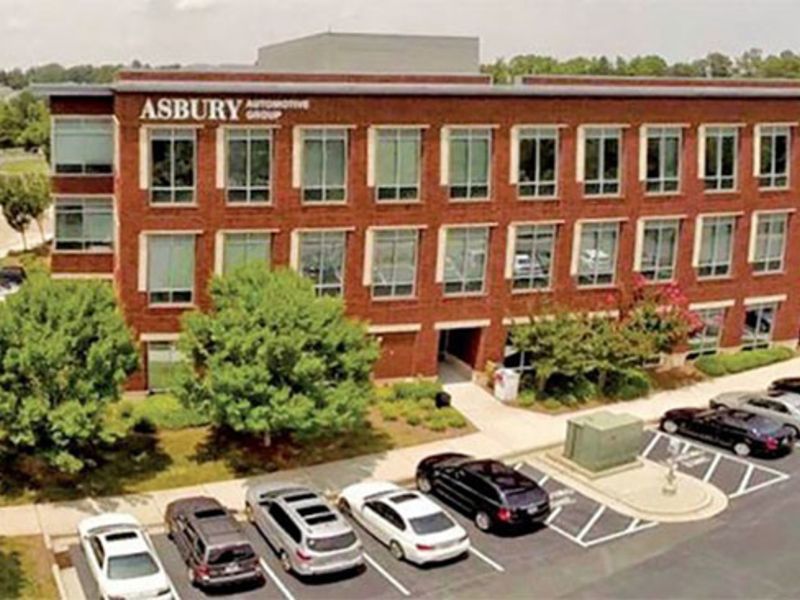 Asbury Automotive Group Inc. will expand its new-vehicle dealership count by nearly two-thirds and grow its annual revenues by more than 70 percent in the planned $3.2 billion acquisition of the Larry H. Miller Dealerships group.

Miller Dealerships is now the country’s eighth-largest new-vehicle retailer and one of the nation’s largest privately held groups.

“This is a strong, very profitable group and we know it further diversifies us extremely well” and positions the company to continue to grow, Asbury CEO David Hult told investors and analysts in a call Wednesday.

Asbury said that the deal, expected to close in the fourth quarter, includes 54 new-vehicle dealerships, seven used-vehicle dealerships and 11 collision centers. Once combined, Asbury’s store count will grow to more than 150 and annual revenues combined will reach $13.7 billion.

The Duluth, Ga., auto retailer will enter six new Western states and largely add domestic-brand stores to its lineup, as it expects to add $5.7 billion in annual revenues.

Asbury also said Wednesday it has deals to buy dealerships representing another $900 million in annual revenue under contract, which it expects would close before the Miller dealerships.

Asked if the sale would cause framework agreement problems with any automakers, Hult said one brand might pose an issue but otherwise characterized it as a matter of seeking automaker approvals with conversations. He didn’t identify the brand.

Framework agreements govern the relationships between automakers and their largest franchised dealers and may limit the number of stores one owner can have of the same brand or in a certain region.

Asbury also obtains a finance and insurance provider, Total Care Auto, which allowed Larry H. Miller to sell its own F&I products and then turn around and pay itself back when customers use the products for free vehicle repairs and service.

About 90 percent of Total Care Auto’s overall claims wind up with the work done at the dealership group.

Total Care Auto produces about $240 million in revenue, has about 2 million contracts open, and delivers earnings before interest, taxes, depreciation and amortization, or EBITDA, margins of more than 20 percent, according to Asbury.

The deal allows Asbury to expand the reach of its online retailing service Clicklane coast-to-coast, the company said.

The supersized deal follows several other megadeals by the publics in the buy-sell industry this year, including Lithia Motors Inc.’s April purchase of Michigan’s Suburban Collection and the announcements this month by Group 1 Automotive Inc. to acquire 30 dealerships from Prime Automotive Group by late November and Sonic Automotive Inc.’s acquisition of RFJ Auto Partners Holdings Inc., planned to close in December.

“This transaction, coupled with the other two major transactions announced by