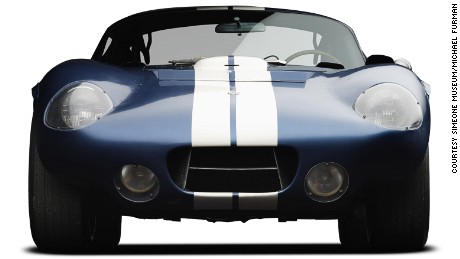 In the 1960s, Carroll Shelby left an indelible mark on motorsport history, with his cars winning the FIA World Sportscar Championship and the 24 Hours of Le Mans race for an American manufacturer for the first time. But their engineering prowess relied upon resourcefulness as well as skill. The Ford GT40 featured an oil cap from a tractor and an identification light from an airplane, and the Shelby Cobra’s indicator switch came from a humble German family car, according to replica car builder Jimmy Price. So when it comes to recreating these and other rare vehicles, he has his work cut out.

The 76-year-old South African has spent decades scouring archives for blueprints and sketching from behind the steering wheel, and has been known to travel halfway around the world in search of an original part or mold. Sourcing components can take years, but he usually gets what he wants. That’s why the replica cars his company Hi-Tech Automotive manufactures are some of the most coveted in the world — and their stories all start on the African continent.

A former civil engineer and long-time car enthusiast, Price started out building replicas of the Shelby Cobra in the mid 1980s (“the most replicated car, then and now,” he says) and broke into the American market in the mid-90s via US distributor Superformance, which he established.

“There was no one doing a complete car,” Price recalls. The search for parts for a car that was last manufactured in the 1960s involved plenty of reading, plus visits to British Cobra manufacturer AC Cars and suppliers that had long halted production. He tells stories of a series of wild goose chases and coincidences that led to all the components finally coming together.

In 1995 the company shipped 35 Cobras. By 2000 it was shipping 450 units a year, with staff headcount rising from 20 to 650. The global recession in the late aughts severely impacted Hi-Tech’s business, with orders shrinking significantly and forcing layoffs. Today, its headcount is back up to around 300, says the owner, manufacturing Cobras, GT40s, Shelby Daytona Coupes and 1963 Chevrolet Corvette Grand Sports.

Price explains that Hi-Tech does not technically build cars. Instead, it creates bodies and chassis for bespoke classics that have the original manufacturers’ seal of approval. They’re dubbed a “roller” or “turnkey minus”: everything you’d expect in a car, minus the engine and transmission. In the US, Hi-Tech’s largest market, a car without these constitutes an “assemblage of parts” in the eyes of the law, which makes importing one more straightforward. Once imported and sold by dealerships, customers arrange for the engine and transmission to be installed by third parties or themselves.

What Hi-Tech builds in its 200,000-square-foot workshop in Gqeberha (formerly known as Port Elizabeth) is authenticity with a dash of the modern. Unlike their racing forbears, replica models come fitted with air conditioning and comfier seats. Hi-Tech also addresses practical aspects racing cars might have dispensed with, like making sure
… Read More... Read More

graphic of your business salary